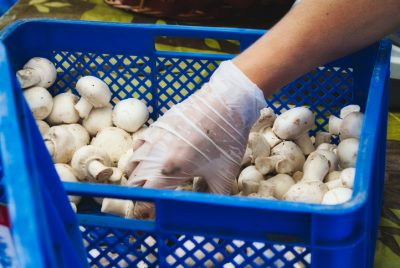 Spear Wilderman recently successfully represented four workers employed by Kaolin Mushroom Farms, Inc, who had been fired for alleged insubordination and threatening what the company termed a wildcat strike.  Five grievants, who worked as mushroom harvesters, had started work one day last April at 7 am, and worked steadily following a brief break taken at around 9.  After finishing their work at one mushroom house at 4 that afternoon, they told their supervisors they were taking a short break to get water or juice at a lunch facility about 30 feet away, before proceeding to the next house for the remaining 15 or 20 minutes of work that day.  The company claimed they were told not to take the break, but one supervisor testified he told them to go to the next house after finishing their break.  They were fired the next day.

In the subsequent arbitration proceeding, Sam Spear of our office represented the Kaolin Workers Union, the only certified union in Pennsylvania’s thriving mushroom industry.  He convinced the arbitrator, Walter DeTreux, that the company’s argument that the grievants’ conduct amounted to a threat of a wildcat strike was way out of proportion to any offense actually committed, and he ordered that four of the workers (one grievant did not appear at the hearing) be reinstated and made whole but for a three-day suspension, the penalty the arbitrator found to be more in keeping with the relative lack of severity of the grievants’ behavior.