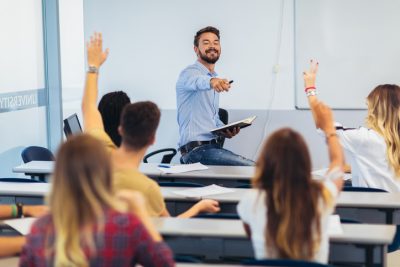 For a number of years, until early June 2017, the Philadelphia Federation of Teachers’ members worked without a new agreement being reached.  That union faced a number of complex legal challenges in this protracted battle.  Perhaps the most serious involved the School Reform Commission’s attempt to “cancel the contract” – to put into effect its own version of what the teachers’ terms and conditions of employment should, in its own opinion, be.  The PFT was successful in having that effort enjoined in the courts, and the dispute reached Pennsylvania’s Supreme Court in 2015.

Spear Wilderman shareholder Sam Spear was privileged to submit an amicus curiae (“friend of the court”) brief on behalf of a number of SW clients and other labor unions in support of the PFT’s fight.  This case was extremely important for a number of reasons, including this:  25 years ago, the Commonwealth Court had established for Pennsylvania public sector unions and employers the principle that, while negotiations over a new contract are going on, the employer may not “unilaterally impose” its “final offer” – the boss’s version of what the contract should look like, not one arrived at through collective bargaining.  It is important to remember this doctrine is the opposite of what the law is in the private sector, where employers can unilaterally implement their final impasse offer.

The public sector rule took a potentially huge hit when the Commonwealth Court – without as much as mentioning its earlier rule – ruled in the PFT litigation that public sector employers could unilaterally implement – and this in a case where the parties had not even reached an impasse!  This was an enormous threat to a crucial tool of collective bargaining public sector unions had come to rely on.  Spear Wilderman’s amicus brief, in addition to supporting the PFT’s arguments on whether its contract could be “cancelled,” argued that Commonwealth Court’s ruling on the unilateral implementation ban was an unjustified and unlawful extension of the law.  And the Supeme Court, which issued its ruling in August 2016, agreed!  Declaring “contract cancellation” of Philadelphia School District CBAs to be illegal, the court (which when it agreed to hear the case had declined to address anything but the issue of contract cancellation) also firmly rejected Commonwealth Court’s unjustified attack on the rights of organized labor.  The Court pointed out that, because it did not have to rule on the issue of “employer options upon an impasse,” its opinion now “should in no way be read as an endorsement of the Commonwealth Court’s position” on that issue. This was the equivalent of an outright repudiation of the Commonwealth Court’s erosion of its older but still established unilateral implementation ban.  That view was buttressed by the conclusion of the opinion, in which the Supreme Court stated it was affirming the Commonwealth Court’s judgment (which denied the School District’s right to cancel the contract) “albeit on different grounds.” The way this plays out now is, if the implementation issue ever actually arises (by the parties actually being at impasse, and the employer threatening or committing implementation in a future case), the PLRB (which would get the issue) or a lower court (which also might, if the union files for an injunction), would now have to regard the Commonwealth Court’s discussion of the employer’s right to implement as having been effectively discredited.  The unilateral implementation ban still remains the law in Pennsylvania.

The Supreme Court’s opinion (which you can access here), in affirming the injunction issued against “cancelling” the teachers’ contract, expressly relied on many of the arguments put forth in Spear Wilderman’s amicus brief. We are gratified that the Court found the contributions made by our brief to be helpful in vindicating these important rights of workers under Pennsylvania law.